We offer the best tickets for this modern art museum situated at Amsterdam’s Museumplein, with skip-the-line entry!

The Stedelijk Museum Amsterdam was founded back in 1874. It’s Holland’s premier museum for modern and contemporary art. It was originally located in the Rijksmuseum  but was moved its current home back in 1895. The building was designed the Dutch architect Adriaan Willem Weissamn in a Neo-Renaissance style.

The museum is now one of three major museums on the Museumplein (museum district) in Amsterdam. In the first decade of the 21st century the Stedelijk Museum Amsterdam was closed for a large-scale renovation. All in all the the renovation took 9 years to complete. In 2012, the museum reopened its doors for the public, with a much discussed new wing nicknamed “the bathtub”. This nickname speaks for itself when you see the newly added wing. 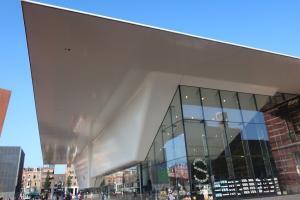 Although the new building clearly has a different appearance than the old one, it fits with the size of the building from 1895. There is a direct, seamless transition between the buildings on each floor.

“Sandberg stripped the interior of the Stedelijk of all its decorations and painted the walls white, creating a neutral background for art. Our plan for the exterior is based on the remaining architecture from the 19th century, with the addition of 21-century technology, and everything is painted white in Sandberg’s colour.”

The interior of the Stedelijk Museum Amsterdam is spacious, bright and airy. It’s an absolute joy to walk around the building and pass the many exebitions.  This is museum is a must-do for those who love their modern art and design. The collection at the museum is world class and permanent. It contains more than 90.000 objects dating from the seventies of the nineteenth century right up to the present. It also combines temporary inspired exhibitions  with of-the-wall installations. In this museum you get to see all the dominant design and art movements since the early twentieth century. 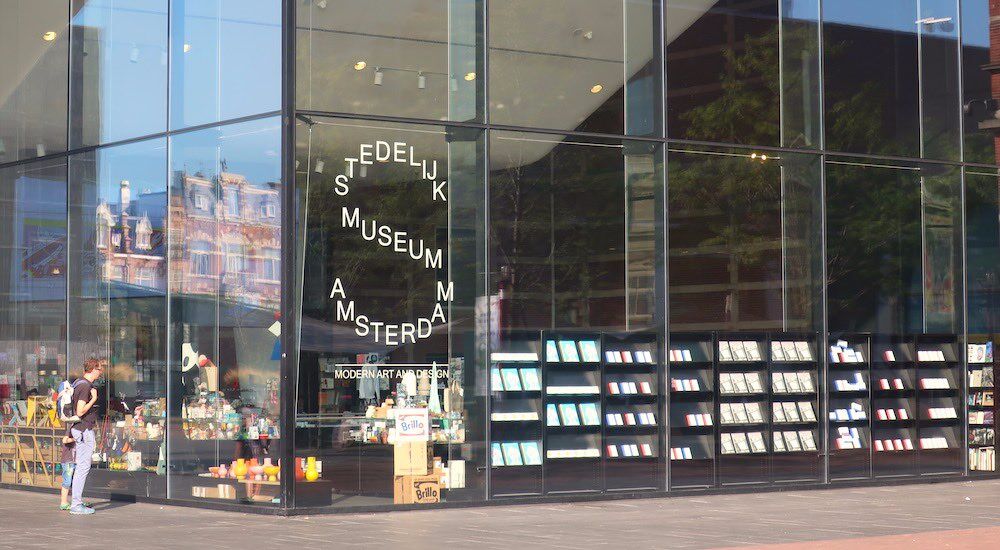 In 2017, the ground floor of ‘the bathtub’ was completely redesigned. The exhibition design of the STEDEDIJKE BASE in the ABN AMRO Room was developed by AMO / Rem Koolhaas in collaboration with Federico Martelli.

It offers an innovative presentation method for the permanent collection. The experimental vision on exhibition making by former director Beatrix Ruf. The bold exhibition architecture and the latest technological developments together create an environment in which visitors can experience the collection via a freely chosen route. 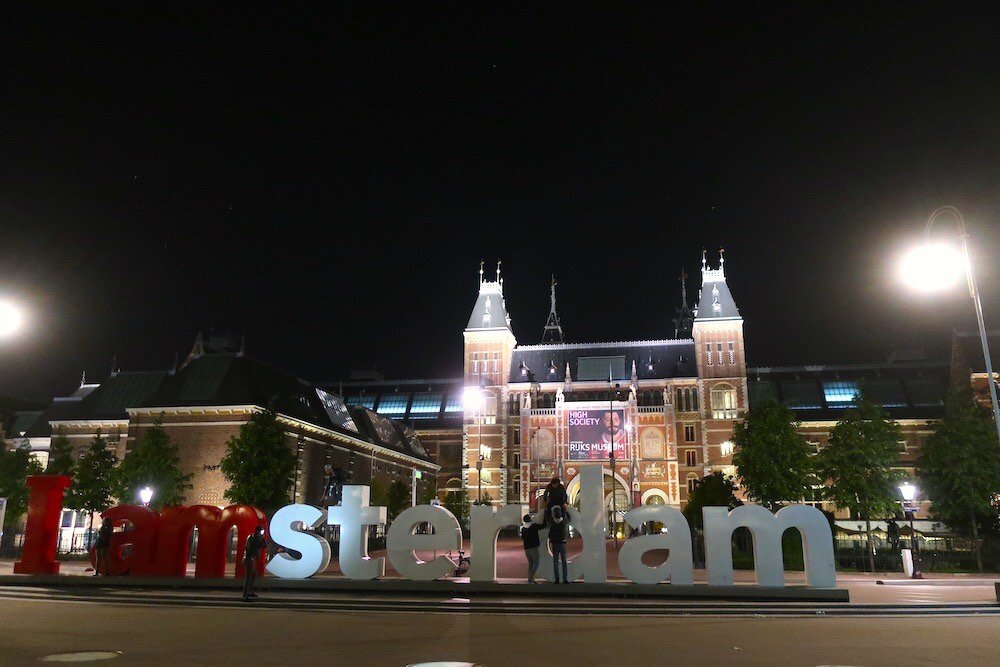 The Stedelijk Museum is located at Museumplein together with the Rijksmuseum and Van Gogh Museum.

One of the highlights at the museum the section that focusses on the work of the modernist Dutch architect H.P. Berlage. Another part focuses on acclaimed American designers Ray and Charles Eames.

All the artworks in the museum are described in English but we’d advice everybody to use the audio tour included with this ticket.

If you’re in a hurry we’d advice you to focus on the homegrown talent that is on display. Collections by the art movement of De Stijl and C0BrA are a must see in our humble opinion.

In the exhibition Migrants in Paris, the Stedelijk Museum highlights the lives of different artists who migrated to the French capital in the early 20th century. The museum exhibits works by Pablo Picasso, Piet Mondriaan and Kees van Dongen, among others. For the first time in more than sixty years, the museum’s 38 collection of Chagalls is on display. A number of paintings have been specially restored for the exhibition.

The artists, photographers and graphic designers who are featured in the current exhibition migrated to Paris in the first half of the last century, which was then regarded as the art center of the world. With the exhibition, the Stedelijk Museum wants to show that the artists – despite their success – often felt outsiders in the French capital.

The Stedelijk Museum is ranked nr. 69 on TripAdvisor out of all the 724 things to do in Amsterdam! A total of 7346 visitors gave the museum an average grade of 4,4 out of 5 on Google.

“After reading reviews of this museum, we went in with high expectations. We were not disappointed. A chance to see a Rothko and Pollock alongside a little walk through of some of Van Gogh’s work. The permenant collection was brilliant, a definite must see for anyone interest in modern art. Don’t forget to pick up the audio guide, it’s free and goes in depth into some of the pieces!” 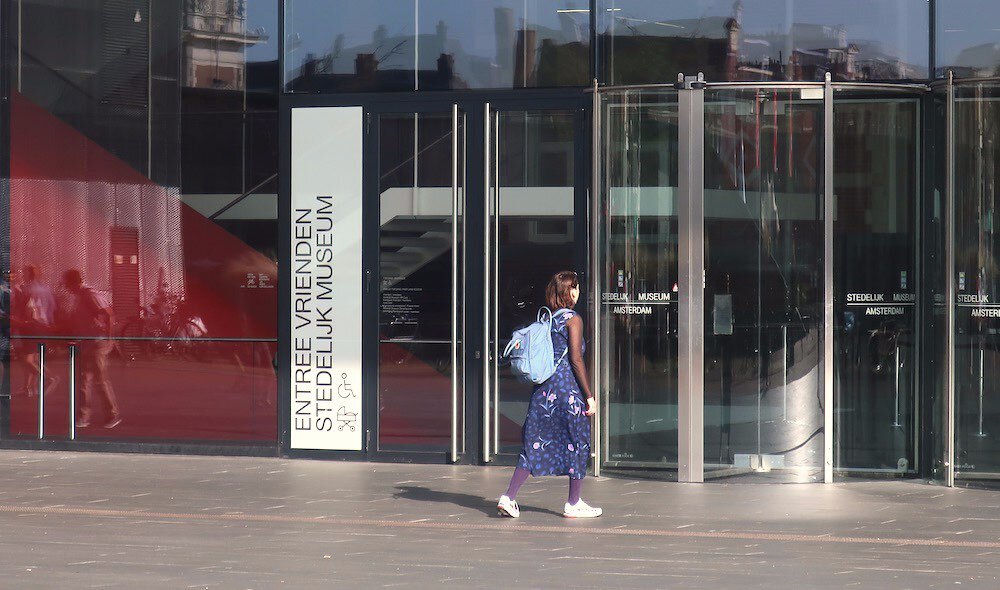 This museum is open 7 days a week and is great to visit under all weather conditions.

How to get from the Red Light District to Stedelijk Museum?

If you’re looking to get from the Red Light District to Stedelijk Museum, then you’re in luck – it’s a quick and easy tram ride. Simply board tram number 4 or number 24 from Dam Square, and ride it for three stops until you reach the museum.

The tram journey should take less than 10 minutes, and you’ll be able to enjoy Amsterdam’s scenic canals as you go. When you arrive at Stedelijk Museum, you’ll be able to explore one of the world’s leading collections of modern and contemporary art, with works by masters such as van Gogh, Monet, and Picasso on display.

So whether you’re a art lover or just looking to explore a different side of Amsterdam, taking the tram from the Red Light District to Stedelijk Museum is a great way to spend an afternoon.